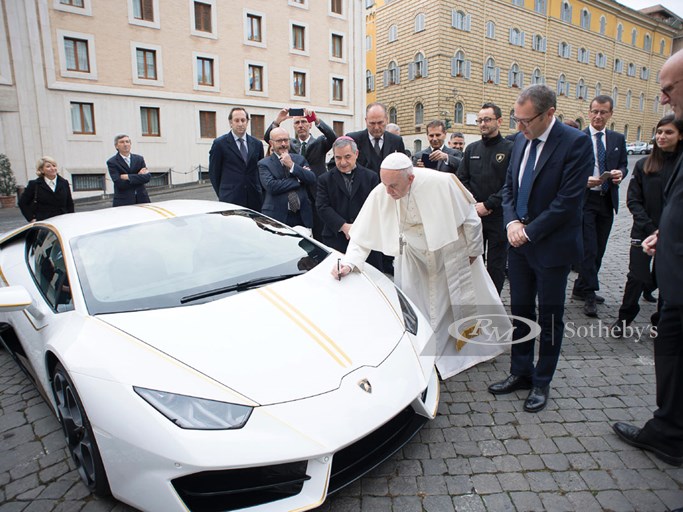 His Holiness Pope Francis signs the Huracán at its unveiling in the Vatican on 15 November alongside Stefano Domenicali, Chairman and Chief Executive Officer of Automobili Lamborghini and Augustin Sabatié-Garat of RM Sotheby’s 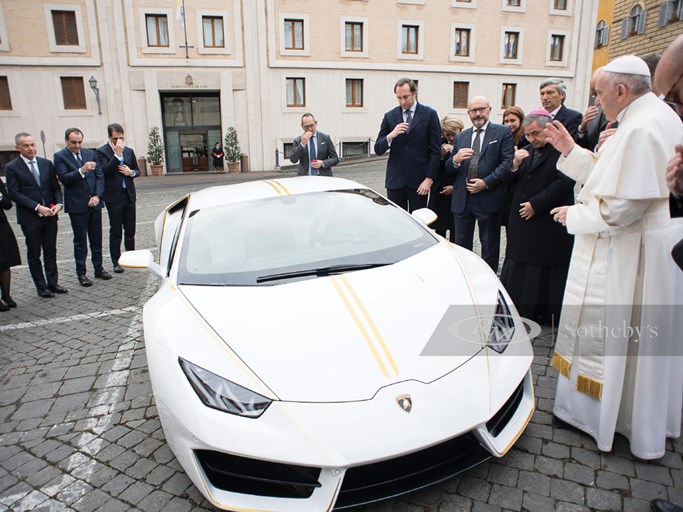 His Holiness Pope Francis blesses the Huracán at its unveiling in the Vatican on 15 November alongside Stefano Domenicali, Chairman and Chief Executive Officer of Automobili Lamborghini and Augustin Sabatié-Garat of RM Sotheby’s

LONDON (15 November 2017) – RM Sotheby’s is honoured to announce that the company will offer a one-of-a-kind 2018 Lamborghini Huracán RWD, designed for His Holiness Pope Francis, at its biennial Monaco sale, 12 May 2018.

Donated to the Pope by Automobili Lamborghini, the car was realized by Lamborghini’s customization department “Ad Personam” in homage to the Vatican. The special edition model pays tribute to the colors of the flag of the Vatican City, painted in Bianco Monocerus with Giallo Tiberino details. The European-specification Lamborghini will be offered without reserve, selling to the highest bidder at RM Sotheby’s Monaco auction, with all proceeds from its sale to be donated to the Holy Father, who will allocate them accordingly to the Vatican’s preferred charitable organizations.

Lamborghini unveiled the one-off car in the Vatican during a special ceremony on 15 November in the presence of Pope Francis, Stefano Domenicali, Chairman and CEO of Automobili Lamborghini, and Augustin Sabatié-Garat, European Auction Manager for RM Sotheby’s. They were joined by a part of Automobili Lamborghini’s management board as well as two technicians who built the one-of-a-kind Huracán. Pope Francis signed the hood of the car during the ceremony, which will be sealed in place prior to the auction.

Following the unveiling, Sabatié-Garat said: “We at RM Sotheby’s are truly honoured to have been chosen to present this unique Huracán at auction. The Huracán is a hugely desirable model in its own right, and His Holiness Pope Francis’ blessing and signing of this one-off example will surely add immeasurably to the importance of the event when it crosses the auction podium in Monaco. We are thrilled to be working with both Lamborghini and the Vatican on such a significant charitable project that will provide assistance to those in need.”

RM Sotheby’s Monaco sale returns to its original location at the glamorous Grimaldi Forum for 2018. The event will once again present the world’s most desirable sports, racing, and coachbuilt automobiles alongside the legendary Grand Prix de Monaco Historique. RM Sotheby’s previously offered a 2005 Ferrari Enzo, originally gifted by Ferrari to Pope John Paul II, at its 2015 Monterey sale, which sold for a final $6,050,000—more than tripling the previous auction record for the model.

For further information on the Lamborghini, please visit www.rmsothebys.com. Call +44 20 7851 7070 to speak to a car specialist about consigning your important car to RM Sotheby’s upcoming Paris or Monaco auctions.