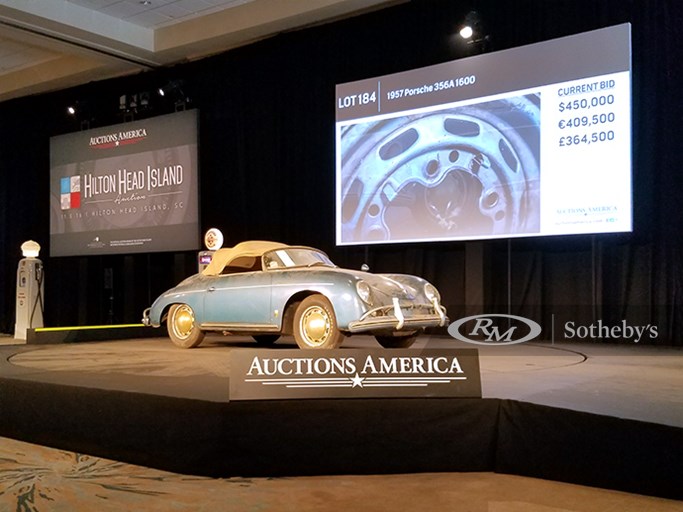 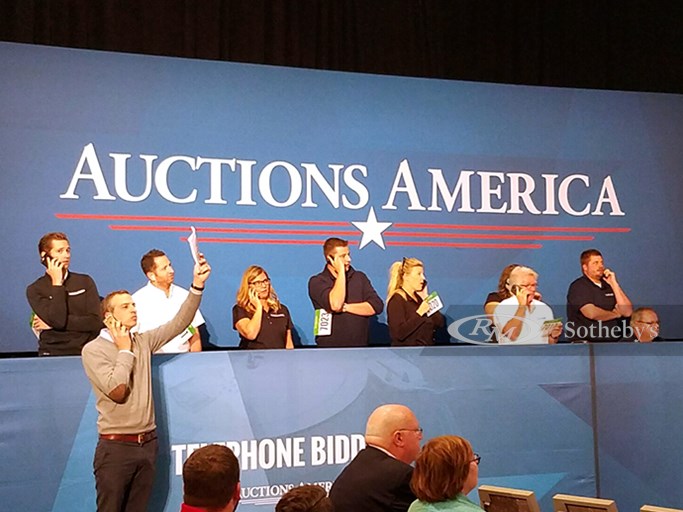 HILTON HEAD ISLAND, South Carolina (November 7, 2016) –  A timewarp 1957 Porsche 356A 1600 Speedster stole the show at  Auctions America’s second annual sale at the Hilton Head Island Motoring Festival on the weekend (November 5), when it almost tripled its pre-sale high estimate. Recently surfacing after more than 40 years parked in a Chicago-area garage, the Aquamarine Blue speedster attracted tremendous interest at Saturday’s auction, spurring a spirited bidding contest between collectors in the room and on the phones before selling for a remarkable $665,500 (versus a pre-sale estimate of $200/250,000).

“We’re thrilled with the result for the Porsche 356, which reflects the continued appetite for highly original, unmolested cars. We anticipated strong interest in the Speedster given its fascinating provenance and long-term ownership, but could certainly have not predicted its incredible final price. It was a thrill to witness—13 phone bidders battling it out with collectors in the room in a bidding contest that lasted almost seven minutes—certainly one of the most exciting auction moments in recent memory,” says Donnie Gould, President, Auctions America.

The Porsche Speedster was one of 103 handpicked vehicles included in the single-day auction, which generated a total of $5.7 million in sales, besting the company’s 2015 Hilton Head Island debut despite challenges from Hurricane Matthew. In addition to the barnfind Porsche, other highlights included: a factory-original, Shelby Registry-documented 1967 AC Shelby 427 Cobra for $726,000; a single-owner 2006 Ford GT Heritage Edition garnered $305,250; and, a 1960 Maserati 3500 GT realized $222,750. Another star of the weekend, an “as new” 2004 Porsche Carrera GT—believed to be the lowest mileage example on the planet with a mere 24 miles on its odometer —exchanged hands for a final $800,000 shortly after the sale’s conclusion.

Gould adds, “We were happy to return to Hilton Head Island for our second annual sale, and take our hats off to the gallant efforts made by the Motoring Festival committee, together with the Hilton Head Island and Bluffton communities, in getting the Island back in shape in the wake of Hurricane Matthew. The auction welcomed bidders from nine countries and 31 states, with 37 percent representing new clients.”

Auctions America now turns its focus to its 2017 calendar, which will kick off in Fort Lauderdale, Florida, March 31 – April 2.

To view full results from the Hilton Head Island sale, or for further information on upcoming events, please visit www.auctionsamerica.com or call toll free 800.980.7635 (or +1 954 566 2209 outside North America).

*Results are listed in USD and inclusive of 10 percent buyer’s premium for automobiles and 15 percent for all other lots, The auction total includes select post-sale transactions.