Porsche Classic has manufactured the last 911 Turbo with an air-cooled engine – 20 years after the last one left the assembly line! The result of years of meticulous work and attention to the very smallest of details by the expert craftsmen at Porsche Classic, this very special show car, the only one of its kind that will ever be completed, is offered at the Porsche 70th Anniversary Sale at the Porsche Experience Center Atlanta on 27 October after having been unveiled to the public at the September 2018 Rennsport Reunion.

“Project Gold,” as Porsche calls it, is a show car that is immediately recognizable as a Porsche of the 993 generation – a series vaunted by enthusiasts as the last of the traditional air-cooled 911s, ending its production run for 1998. The 993-generation Porsche 911 Turbo continues to be one of the most astonishingly fast, sophisticated, and downright desirable cars of its generation, and perhaps of any Porsche to ever carry the legendary “Turbo” designation. It offered twin turbos, all-wheel drive, over 400 hp, and a blindingly fast sprint from 0–60 in under four seconds, the likes of which the automotive industry had never seen up to that time! This was, for all intents and purposes, the perfect Porsche to cap off the last air-cooled series.

The aim of “Project Gold” was to showcase the exceptional capabilities of Porsche Classic alongside the customization resources of Porsche Exclusive Manufaktur, from which the general aesthetic presentation was derived using colors and appointments consistent with those of the current 911 Turbo S Exclusive Series. The result is truly a one-of-a-kind classic built to celebrate the 70th anniversary of Porsche and showcase not only the company’s history, but the trajectory that it is charting for itself.

With regard to its specifications, the body of “Project Gold” is an original, new-old-stock body shell from the factory in Zuffenhausen. The life of “Project Gold” began with this body shell on a straightening bench, where it was mounted for in-depth checking and adjustment, using the original frames, tension gauges, and data sheets. Gap dimensions and functioning of the doors, engine lid, and rear lid were all tested before the side air vents were inserted into the rear panels with meticulous attention, replicating a feature that was available on the 993 Turbo S.

Thereafter, the build of “Project Gold,” which lasted one-and-a-half years, mainly relied on the more than 52,000 genuine parts available in Porsche Classic’s resources, of which there are currently available 6,500 parts for the 993 generation alone. Porsche Classic worked closely with Porsche Exclusive Manufaktur in presenting a car that was at once current and forward-thinking in its execution, as well as authentic to the heritage of the 993 Turbo.

The 3.6-liter, six-cylinder bi-turbocharged boxer engine was built entirely from brand-new genuine parts and delivers 450 hp at 6,000 rpm – 42 hp more than the standard 993 Turbo had. This power upgrade was achieved by implementing the “Werksleistungssteigerung II” (WLS II) power kit. With a constantly elevated boost pressure, the engine consistently delivers the maximum torque of 585 Nm, an increase of 45 Nm. The WLS II’s main features include larger turbos, an additional oil cooler, and a modified Motronic® electronic control unit. Furthermore, ceramic port liners were inserted into the exhaust channels of the cylinders, which allow for a reduction in cylinder head temperature. The cooling fins in the cylinders are very thin, enabling the turbocharged engine to remain quite stable in terms of temperature. All told, this power upgrade to 450 hp was applied to just 345 911 Turbo S vehicles in period. The gearbox is a six-speed unit built entirely with brand-new Porsche Classic genuine components.

In many instances, where two decades of further engineering development were available, “Project Gold” benefitted from Porsche’s latest technologies and paint application. At the Porsche AG paint facility in Zuffenhausen, “Project Gold” was treated to Cathodic Dip Coating (CDC) to apply its primer. The electrostatic charge means that the paint particles attach themselves to every last nook and cranny, thereby better protecting areas that are difficult to reach as compared to utilizing a spray gun. Porsche Classic thereby has the privilege of channeling classic cars into the current production line, and “Project Gold” was no exception, benefiting from the latest in state-of-the-art Porsche paint application. The finish on the car, Golden Yellow Metallic, was applied in three stages, built up with two layers of clear lacquer. First the lacquer base, applied by hand, then a second coat of clear lacquer, gently refined with fine sanding, before applying the final clear coating. The result is a remarkable level of finish and presentation which improve further upon the 993’s already impressive level of fit and finish.

The interior of “Project Gold” includes the finest black leathers and selectively chosen gold stitching as well as carbon fiber trims. Everything was designed and applied by hand, taking into consideration not only the original 993 Turbo interior, but also the detail work from the current 911 Turbo S Exclusive Series. In fact, as one looks around the car, so much of “Project Gold” was equipped with a host of individually produced, custom-made components not available on any other production cars. For example, the Litronic headlights were entirely dismantled and afterwards equipped with custom-made black reflectors. The turn signals and backlight strip were opened to tint the diffusers in a darker grey color. And perhaps most extraordinary is the construction of the Turbo wheels. As opposed to simply spraying the wheels in black and pinstriping a gold line onto the perimeter, which would have opened up the process to natural imperfection, the builders of “Project Gold” took an altogether unique approach. First, the wheels were primed in Golden Yellow Metallic, before being painted over in high-gloss black. Finally, the wheels were subjected to a laser beam, carefully stripping out the top layer of black and revealing a golden pinstripe below.

Once completed, “Project Gold” was subjected to a detailed and extensive functional and quality control process. The driving functions and driving dynamics were tested at the Porsche Development Centre in Weissach. The noise behavior of the car on different surfaces was checked, and the cornering and braking behavior was tested on the test track as well, all of which the car passed with flying colors.

After one-and-a-half years of work by numerous, highly experienced Porsche professionals, the offering of “Project Gold” is a truly unique, once-in-a-lifetime opportunity. Porsche have clearly stated they will never build another car like it, as indicated by its series designation “001/001.” Perhaps most importantly, Dr. Ing. h.c. F. Porsche AG (“Porsche AG”), as the seller, declared that net proceeds from the car’s sale, above its hypothetical original retail value and actual auction expenses, will go to benefit the Ferry Porsche Foundation, a non-profit charity organized in Germany that is dedicated to education, social issues, and youth development. The Ferry Porsche Foundation was established earlier this year to mark the “70 years of Porsche sports cars” celebrations. Further information about the donation amount is stated at the back of the catalogue under “Payment and Donation.” For further information about this exceptionally unique offering and its availability at auction, please contact an RM Sotheby’s representative. Interested bidders are encouraged to review the terms and conditions associated with the purchase of this lot, for which full details are enclosed in the back of the auction catalogue. Please be aware that the vehicle will not be on display during the auction, though it is expected to be available for static display and inspection the evening before the auction at the Porsche Experience Center Atlanta.

Please refer to the back of this catalogue and section 33 of the Bidders’ Conditions of Business for complete, detailed terms on this car’s conditions of sale as well as delivery, payment, and charitable donation details. Bidders are advised to inform themselves as to the car’s required collection from Stuttgart, Germany, offering on a Bill of Sale, and inability for legal road registration. 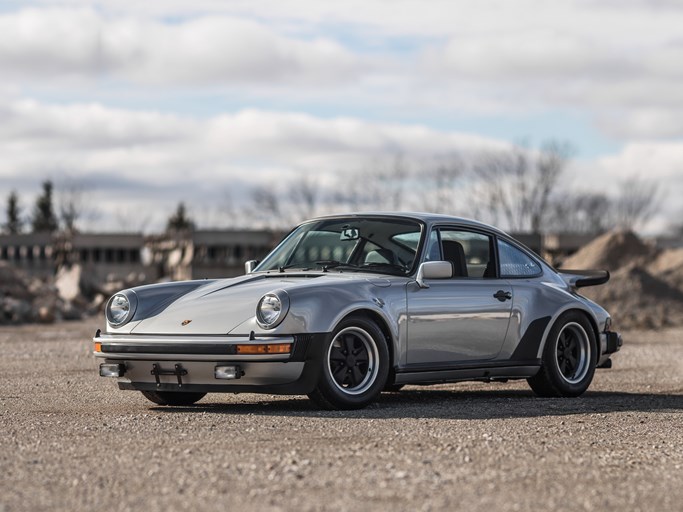 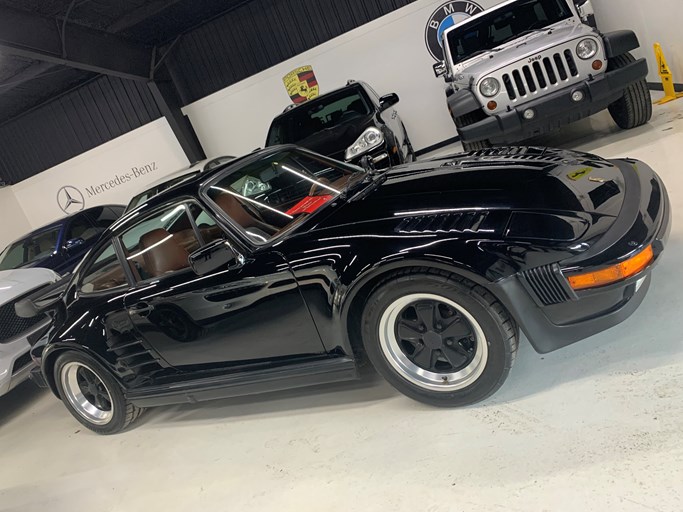 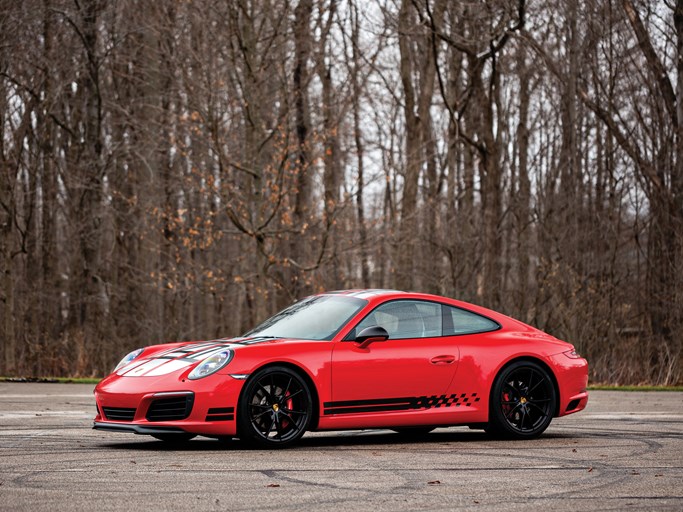