Consign Today Register to bid Lot Inquiry View Files View Lots
Chassis No.
VV9SP3LX1FV086406
Please note, this car is a prototype and has never been registered. As such, it may be difficult to register the car in certain jurisdictions. Please contact your local authority to enquire further. The manufacturer has confirmed in writing that they will give as much support as possible to ease the registration process.
Please note that this lot is sold on a Bill of Sale.

Based in Valencia, Spania GTA was founded by Domingo Ochoa in 1994 following a long career in motorsport. Building an enviable international reputation, the team competed in a variety of different championships, including the Formula 3, Euroformula Open Championship, Superleague Formula, and International GT Open. Seeking to bring his track expertise to the road and to realize a personal dream, Ochoa and Spania GTA embarked on a mission to build a hand-built Spanish supercar, offering the very best in terms of performance to compete with the supercar establishment.

Development on the new supercar, dubbed the Spano, began in 2007 and a pre-production model was first presented to a select group of customers in April 2009. After an exhibition at Top Marques Monaco in 2010, Spania GTA stepped onto the world stage for the first time, showing the car at the 2011 Geneva Motor Show. Two years later, the first-series Spano would return to Geneva albeit production ready.

Utilizing carbon fibre and Kevlar bodywork and underpinned by a custom chassis constructed from carbon fibre, graphene, titanium and kevlar, the monocoque is both remarkably strong and extraordinary light, tipping the scales at just 80 kg, while the completed car weighs 1,450 kg. From the initial pre-production examples, Spania chose to fit the GTA Spano with a twin-turbocharged V-10 engine built by Ilmor Engineering in Plymouth, Michigan. Its braking system is equally impressive, consisting of 380 mm diameter carbon ceramic ventilated disc brakes with six-piston calipers, supplied by AP Racing.

Inside, the Spano is outfitted with all the comforts one would expect from a supercar of this calibre. The interior is defined by the car’s glass roof, which can be electronically adjusted by driver or passenger to manage the amount of light entering the cabin. Carbon fiber and leather are abundant, and the LCD instrument panel can be customized to suit the driver’s tastes. A 7” LCD screen in the dashboard manages the GPS navigation and sounds system, which can be connected to phones and audio devices using either a USB cable or Bluetooth.

Unveiled at the 2015 Geneva Motor Show, this second-generation iteration of the Spano featured a number of interesting changes to the first-generation model. Now equipped with a 7.9-litre twin-turbocharged V-10 engine, this engine was initially based on the V-10 first seen in the first-generation Dodge Viper. However, it has been modified for Spania GTA’s use by Ilmor Engineering, utilizing a dry sump, forged crankshafts , titanium valves and modified camshafts, along with the aforementioned twin turbo chargers. Power was raised to an incredible 925 bhp with 900 lb-ft of torque, driven through a seven-speed automated transmission produced by CIMA in Italy. Several changes were made to update the car’s styling, including updated headlights and LED taillights, and Spania GTA worked with a Spanish nanotechnology company called Graphenano to utilize graphene materials in the car’s chassis in an effort to increase structural rigidity and reduce weight. Spania GTA claims that the car can reach 100 km/h from a standstill in 2.9 seconds, leading to a top speed of over 370 km/h.

Although Spania GTA intended to build a run of 99 Spanos, at the present time, twelve examples have been built in total. This comprises of ten cars built within the first series and two built within the second series. Within the first series, this includes six built with a 8.3-litre naturally-aspirated V-10 and four examples built with a 8.4-litre turbocharged V-10 engine, both based on Dodge Viper engines but comprehensively modified by Spania GTA’s technicians. Two of these first-series cars were destroyed in homologation and durability testing, four were sold to Singapore, two were sold to China, one was sold to the United States, and another prototype was used in the movie Need for Speed and is still owned by Spania GTA. Two Spanos were built within the second series, with one example destroyed during homologation testing, leaving this example as the only second-generation Spano currently in existence.

Born white, the car was shown as such at the 2015 Geneva Motor Show to introduce the second generation Spano and later finished in its current colour scheme of a matte grey finish with a central silver stripe and red accents. This Spano was also used in filming of the hit HBO television series Ballers where it was driven by John David Washington.

Fittingly, the car was acquired by a Spanish enthusiast following its completion, press duties, and testing with Spania GTA and it has remained in Spain ever since. Driven just under 8,500 km from new, the majority of this mileage was accrued during factory testing and motor shows, proving that it has been properly driven in and can be enjoyed on the open road, as likely the only Spano passing motorists have ever seen, or perhaps will ever see.

Included in the car’s history file is a letter from Spania GTA, confirming that they have spare parts and original designs on hand, can facilitate repairs and servicing of the Spano at their facilities, and can provide advisory services and support in order to register the car. The amount of mileage accrued on this Spano shows that the car is truly usable and should be driven to be enjoyed at its fullest as a showcase of Spanish automotive engineering and a man’s dreams coming to fruition. 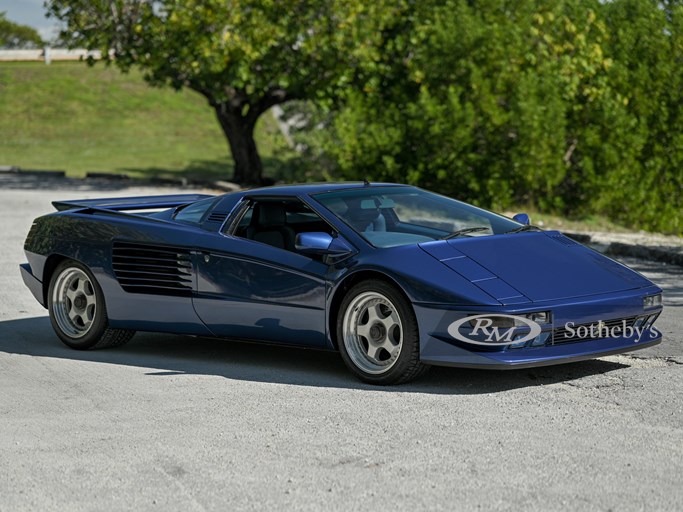