Chassis No.
5760278
Documents
US Title
Catalogue

Known for its rugged appearance and sure-footed capability on rough terrain, the Pinzgauer is a military vehicle designed to excel in hostile environments. Manufactured by Steyr-Puch, the truck is intricately engineered to perform off-road without compromise, while still relying on simple technology to make the trucks easy to fix should problems arise. Two types of Pinzgauer were made by Steyr-Puch: the 710 in four-wheel drive, and the 712, which added an axle for six-wheel drive. The extra drive wheels allowed for 300 kilograms (~661 pounds) of additional towing capacity and better grip on the driving surface.

This example started as a Pinzgauer 710K—the “K” referring to its configuration as a five-door hard-top—but was later converted to its current 712DK specification. The most notable change is the addition of the extra two wheels, while the “DK” letters refer to the truck’s set-up as a four-door crew cab pickup. The adaptation of this vehicle is told to have begun when the body of a 712M—the “M” indicating a soft top with rear passenger seats—was sourced from the Swiss military. The new body was cut to fit and welded onto parts of the original structure, including the roof, shortened to give the cab a hard top. During its conversion, a second roof hatch was added while the rear seats of the cab were moved forward.

In its completed form, the Pinzgauer wears satin military green paintwork with artwork by Nico Sclater, a.k.a. Ornamental Conifer. Camouflage material covers the rear pickup load area, within which a custom seating configuration housing two rows of benches for further passenger seating. Around the exterior of the truck, a custom front bumper and brush guard is fitted in front of additional lighting. The taillight guards are custom, the front steps are removable, and extra storage is offered with the roof rack covering the hard top. Inside, front seats are finished in black leather, and the rear cab seats are themed around a camouflage “jungle” color scheme. The lot is accompanied by selected spare parts including spare wheels and tires, and seats.

While part of the Andrews Collection, this Pinzgauer participated in the 2019 Copperstate Overland, a multi-day off-road driving tour through the beautiful state of Arizona. 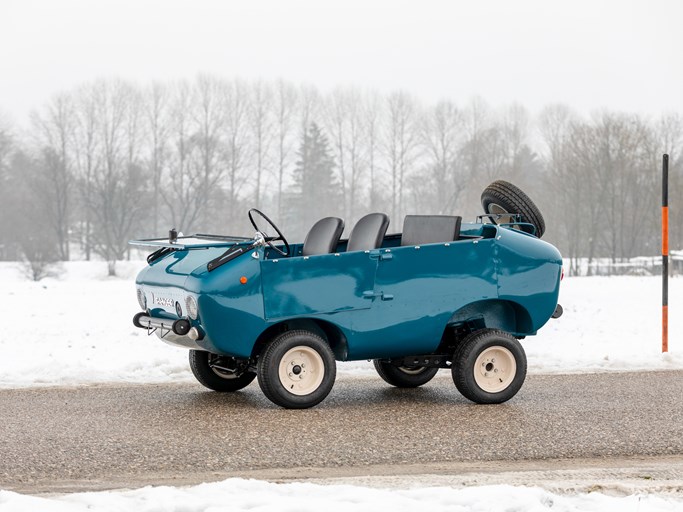