It is a cliché to say that a special automobile needs no introduction—but the Ferrari 250 California, an open-top machine offering space for two people and their luggage on a performance-bred chassis, truly meets that criteria. Originally engineered as a convertible version of the 250 GT berlinetta “TdF,” it proved a tremendous success and was continued on that model’s short-wheelbase (SWB) successor chassis, now measuring 2,400 mm between the axles. The engine of this upgraded model was the newer Tipo 168 design with new heads and larger valves, reportedly capable of up to 280 horsepower. The track was widened, new Koni adjustable and telescopic shock absorbers were fitted, and the brakes were upgraded to Dunlop discs at all four wheels, providing transformative handling abilities.

Celebrities such as Alain Delon, James Coburn, Peter Helm, Briggs Cunningham, Johnny Halliday, and Roger Vadim owned SWB California Spiders, but the car was happiest at high speeds, not purring around Beverly Hills. This was a car whose owners could and did drive it to the track, race it, and win—and then drive it home. One of the cars was campaigned by Jan De Vroom in the 1960 24 Hours of Le Mans and the 1961 12 Hours of Sebring, finishing 12th overall and 3rd in Class in the latter—a remarkable result for a street-legal convertible running against purpose-built racing machines. A handful of other examples competed in the Targa Florio and a variety of other European hill climbs and sports car races in the U.S., thereby cementing the California Spider’s place in Ferrari history as one of the great dual-purpose GT cars.

Completed by the factory on 28 December 1962, chassis 4131 GT was the 55th of the 56 SWB California Spiders produced and was equipped as a road car with steel bodywork, open headlights (one of 19), front bumper guards, and the features of “teardrop” side-marker lights and the latest tipo 168/61 engine. Finished in Rosso (10593), an elegant, slightly darker shade of red, with a beige leather (VM 3218) interior, it was delivered new by the famous official Ferrari dealer Automobile Monteverdi AG of Binningen-Basel, Switzerland, and first registered for the road in that country on 19 February 1963, as seen in Roger Gloor and C.L. Wagner’s Monteverdi (p. 122). Its original owner was John Amborn, also of Binningen. Unique to Swiss market cars, 4131 GT was provided with a dual horn system (country/city) and was also required to have a side mirror installed on the driver’s-side fender.

According to marque historian Marcel Massini, the car was enjoyed by a couple of subsequent Swiss owners, including former Olympic medalist skier Ralph Olinger, until 1971. It was sold that year through Rob de la Rive Box to George Carrick of Ontario, Canada, with approximately 55,000 kilometers accrued. Mr. Carrick enjoyed the car very much and maintained it for over a decade, during which time the car served as the inspiration and as the cover feature of Mr. Carrick’s own volume on the model, The Spyder California—A Ferrari of Particular Distinction, one of the first model-specific books written on a Ferrari. Mr. Carrick also exhibited the car at the Ferrari Club of America’s annual meetings in 1973, 1975, and 1977.

Mr. Carrick recently recounted a fascinating story in which he brought the car to Toronto dealer Maranello Motors for service and found himself building a relationship with a young mechanic named Remo Ferri. Shortly thereafter Mr. Ferri went into business on his own, and thus Mr. Carrick and his California Spider became the first customers of what is today the modern R. Ferri Automotive, which includes Ferrari of Ontario and R. Ferri Motorsport, and one of Canada’s best-known, most respected Ferrari figures.

In 1983 the car, now with 80,000 km, was sold to a Swiss customer, Dr. Jurg Heer, but was destined to remain in North America when, shortly thereafter, it passed to Walt McCune of Modena Imports in Los Angeles. It passed in 1992 to Jim Wollisoff of Long Island, then in December of 1994 to the present owner, in whose collection it has now remained for nearly 25 years.

The car now shows 88,491 km at the time of cataloguing and, according to former owner George Carrick, remains virtually as he left it in the early 1980s. Even the delightfully patinated original leather interior remains intact, with an inviting and charmingly “broken-in” appearance, fairly begging a new owner to slip behind the wheel and drive the car as Ferrari intended.

Recently the car was awarded its all-important Ferrari Classiche certification, recognizing that it remains as it was delivered from the factory, including the original engine, gearbox, differential, and other drivetrain components, down to the Borrani wire wheels. It is accompanied by its Red Book, verifying its originality and authenticity, and could well be considered the most original and unmolested survivor of its kind—important when considering a model that was frequently used hard by the original owners.

With covered headlight examples commanding a large and historically unprecedented premium over equal-quality open-headlight examples in today’s market, 4131 GT presents a very interesting opportunity to the discerning collector. At only a modest premium to a Series 1 Pininfarina cabriolet or 250 LWB California Spyder, 4131 GT’s latest tipo 168/61 motor, Dunlop disc brakes, and upgraded suspension offer a noticeably improved driving experience over the earlier models. It is easy to say of this automobile what has been said before about its brethren, speaking of its rarity, its specification, and its performance. Chassis number 4131 GT is, however, something truly special, as an automobile that remains much as its early enthusiast owners drove it. It still joyfully wears their fingerprints and still appears ready to take on an open road with a new caretaker behind the wheel, shifting through the gears and enjoying the amazing sound of an iconic V-12.

It is a California Spider of the utmost distinction—a gentleman’s machine for those who yearn to drive. 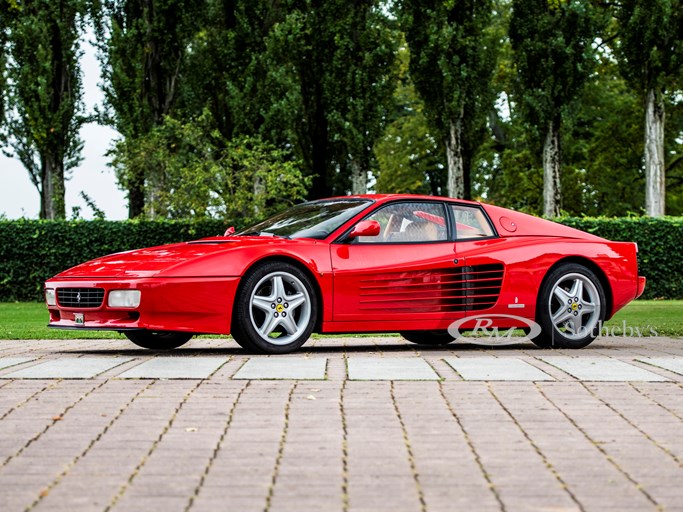