• One of only 34 production R models

• Owned and raced by its first owner, Richard Jordan, for 21 years

• Extraordinarily original, down to the original Plexiglas and racing wheels

• Offered from a prominent private collection

• Less than 4,900 original miles on the original engine and transmission

Without exaggeration, Carroll Shelby may be considered a legend of postwar motorsports. In the early days, he seemed like an amiable east Texas “good old boy.” Scratch that surface and one would have discovered qualities of drive, ambition, and a tenacity that one associates with moguls of industry. Creativity and an uncanny sense of timing were also seemingly natural facets of Shelby’s personality. Timing? Well, was it luck that he approached AC Cars about Cobra chassis just as their engine supply had dried up? Was it pure fate that he walked through Ford’s front door just as the company had decided to implement “Total Performance”? One wonders. Carroll Shelby’s racing exploits, which included a Le Mans win in 1959 and his early success with the AC Cobra cars are well known, but his work on Ford’s “ponycar” is equally fascinating.

While Ford’s new Mustang was a huge hit, selling some 22,000 units the first day offered, it would never be mistaken for a “Total Performance” poster boy, especially since this pony was based on the running gear of Ford’s Falcon economy compact. Carroll Shelby, already a Ford-related performance personality since his AC Cobras were in Ford dealerships, was tapped to transform the wimpy Mustang into a potential “B” Production SCCA racer. Thus, the legendary Shelby GT350 R was born.

Putting the Pony Before the Cart

The Shelby American Automobile Club’s Registry offers an interesting description of the 350 and 350 R series, “Unlike most production race cars which are created by modifying the street version, the GT350 road car was in fact a detuned R-Model.”

There were only 34 R-models built, and they are the fire-breathing, Corvette-beating, heart and soul of the Shelby Mustang lineage. All were Wimbledon white with blue stripes, and they were all unbelievably competitive. They were immediately successful in achieving their intended purpose, dominating SCCA B/Production racing in their first season and nearly obliterating other marques and models from the annual SCCA runoffs, then known as the American Road Racing Championship, for the next three years.

The GT350 had one purpose and that was to put the Ford Mustang in the winner’s circle in SCCA road racing. The initiative for the GT350 came from the Ford Motor Company, which wisely recognized that the Mustang’s success with consumers could be enhanced with the performance image that came from racing. Shelby was the logical partner but was already involved in building Cobras and supporting a busy racing effort, including the Ford GT40 MK II and the USRRC/USAC King Cobras. So, Ford made it easy, as well as lucrative, by doing most of the hard work in-house.

The first hurdle was SCCA’s requirement that 100 cars, all of which would be raced, be built before the beginning of the year. Ford agreed to supply Mustangs to Shelby’s specifications, and Shelby picked through the Ford parts catalogue to specify the basic package that would lend itself to road racing with fairly simple upgrades to be made in the Shelby American shop, a project headed by Chuck Cantwell. The production cars and all the R-models were specially built in sequence at Ford’s San Jose, California factory in Wimbledon White with Black interiors and 271 hp K-code engines, aluminum case Borg Warner T-10M four-speed transmissions, nine-inch rear axle with Fairlane station wagon drum brakes, “export” shock tower brace, and sintered metallic brake pads and linings. Left in San Jose were the hoods, rear seats, radios, and exhaust systems. An additional 15 cars were even more special. These arrived at Shelby without side or rear windows, heaters, defrosters, upholstery, headliners, insulation, or sound deadening. They were the first R-models.

At Shelby, all the GT350s essentially received the same suspension modifications. The front suspension upper A-arm chassis pivots were lowered an inch and Koni shocks were installed, along with a one-inch front sway bar and quick ratio steering kits. The K-shaped “export” brace was augmented with another bar joining the tops of the shock towers. The leaf spring suspended rear axles got traction bars and Detroit “no-spin” locking differentials. Other changes included fiberglass hoods with cold air intake scoops, wood-rim steering wheels, and a fiberglass shelf where the rear seats had been. Batteries were trunk mounted for better weight distribution and a Shelby tach and oil pressure gauge was installed in a dash top mounted pod. Three-inch competition style lap belts were installed in all the GT350s and Shelby, ever conscious of ways to conserve money and time, used the inner belt mounting bolts to secure a driveshaft safety hoop.

Having created the framework that would meet SCCA’s requirements, the Shelby American crew turned its attention to building the few, special competition cars that would campaign in the racing season that would be in full swing in only a few weeks. Using the production GT350 as a base, Shelby concentrated on those things which any conscientious racer building a production-based GT or sports car would do, improving handling, power, and reliability. In this case, by design, the GT350 R’s handling was not an issue.

Engines were blueprinted in Shelby’s engine shop, while Valley Porting Service extensively modified the heads. A Holley four-barrel carburetor on a Cobra high-rise aluminum intake manifold was installed, with Tri-Y headers built by Cyclone handling the exhaust. Output ranged from 325 to 360 horsepower on the Shelby dyno. Front and rear fenders were flared to accept American Racing 15x7 five-spoke wheels. The engine’s increased output dictated an oil cooler for reliability. It was mounted behind the special high capacity radiators and required more air flow, which resulted in the R-models’ most distinctive feature: a new front body apron constructed from fiberglass with a deep air intake flanked by brake cooling air scoops.

Plexiglass side windows with aluminum frames saved 25 pounds over the stock side glass. A special Plexiglass rear window was formed, which fitted the rear light opening with a two-inch gap at the top to exhaust air from the interior and smooth air flow over the rear body and also said to increase the R-models’ top speed by five miles an hour. A four-point roll bar was installed with a massive 34-gallon baffled fuel tank fabricated from the bottoms of two standard Mustang tanks.

When complete, the Shelby Mustang GT350 R was a turn-key race car that was ready to go straight from the Ford dealer, where it was bought directly, to an SCCA race weekend and compete at the highest level.

This particular GT350 R is no exception and may very well be one of the most original, sought after examples in existence.

Following the work it received at Ford, the car was received at Shelby American on December 21, 1964, for its conversion into a Shelby GT350 R, the work for which started in March and ended in June, complete with original engine 52127, and rated at a thunderous 325 hp. Ordered by Jack Loftus in August of 1965, the completed car was shipped from the Los Angeles Airport to O’Hare International Airport, via TWA, for delivery to Jack Loftus Ford, of Hinsdale, Illinois, with an extra 4.11 rear end, at a total price of $6,105, more than twice that of a regular, stock Ford Mustang!

SFM5R106’s fortunate original owner was one Richard Jordan, of Downers Grove, Illinois, a suburb of Chicago. Prior to going racing, however, Dick Jordan participated in the Carroll Shelby School of High Performance Driving (Riverside, California), as evidenced by a graduation plaque in the car’s file. Diploma in one hand and the keys to his R-model in the other, Mr. Jordan tore up the racing circuits, competing in Midwestern SCCA national events until the early-1970s. Among other events, the Shelby American World Registry notes his participation at Elkhart Lake, Wisconsin in 1965, the month after he bought the car. In fact, he raced at Elkhart Lake several more times until the early-1970s, as well as Clermont, Indiana, Lynndale Farms, Wisconsin, Wilmot Raceway, Illinois, and other tracks.

After its racing career, Jordan placed the original, unmolested race car in storage, where it remained until 1986—an extraordinary 21 years after he first bought the car. As such, this GT350 R is one of the few examples to have had only one original racing driver and to have remained in such extraordinary original condition.

Paul Zimmons, of Potomac, Maryland, purchased the car in 1987 and restored the car before it won the Gold Award in the Competition Class at SAAC-18, in Watkins Glen in 1993. The next owner, Paul Andrews, of New Jersey, continued this tradition by winning Second Place Popular Vote at SAAC-25, at Lime Rock Park in 2000. Since that time, the car has always been beautifully and perfectly maintained, first by Anthony Tomasi (Wilmington, Massachusetts), then Dave Christenholz (Paradise Valley, Arizona), and more recently, in 2007, by Colin Comer, the noted Shelby enthusiast, author, and marque expert. By the time Mr. Comer acquired the car, it still only had 4,800 original miles from new, all accumulated on race tracks, and rode on its original magnesium American wheels. In fact, the car still had its original Plexiglas windows! Currently, R106 has only 4,858 miles on its odometer.

Since its acquisition by the current owner, a well-respected collector in his own right, SFM5R106 has remained in this extraordinary state—restored to the exact configuration in which it appeared at its first race at Road America, utilizing only original components installed on the car at Shelby American and NOS service parts as needed. In fact, the car still only has less than 4,900 miles showing on the odometer and retains its original drivetrain, including the transmission.

R106 recently visited Blackhawk Farms Raceway and was right at home. It is still set-up as a competitive car and tuned appropriately. After many laps completed with the current owner behind the wheel, he reported on the tremendous performance of the car and the superb handling, as well as how downright nimble the car was.

Furthermore, the original paperwork authorizing and confirming Dick Jordan’s delivery of R106 from the TWA O’Hare terminal are in the file, along with original correspondence between Shelby American Headquarters Sales Manager Dante R. Cardone and Jack Loftus Ford’s Sales Representative Bill Stuchl, regarding the parts availability of specific components on R106. In all, a large binder complete with numerous period photos, as well as extensive, original paperwork rarely seen with such a car, especially a race car, accompanies R106. For further information regarding these documents, please contact an RM representative.

The opportunity to acquire such an extraordinary GT350 R may never present itself again. Tremendously original, owned and raced by the same gentleman for two decades, and incredibly well-documented, SFM5R106 appears precisely as it did the first time Mr. Jordan turned the ignition key at Elkhart Lake. Racing cars are all too often modified, damaged, upgraded, and worst yet, discarded. R106, however, has been spared all those indignities to present Shelby enthusiasts with a factory-correct, authentically restored, and supremely original GT350 R with which to take to the track, stun SAAC judges, and crown one’s collection of historically significant race cars. 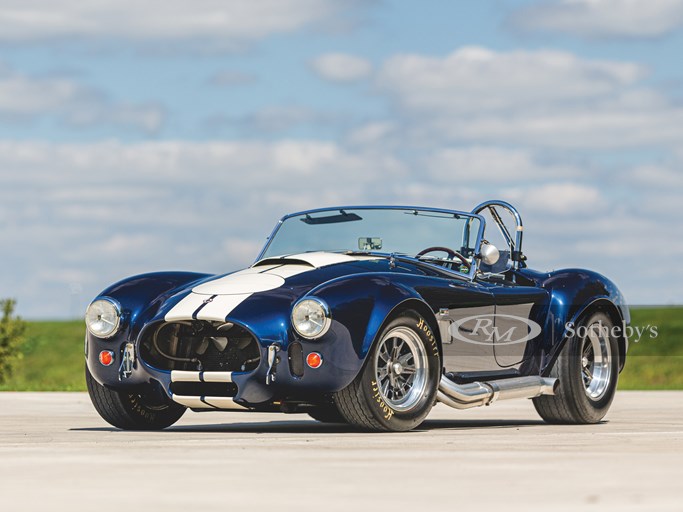 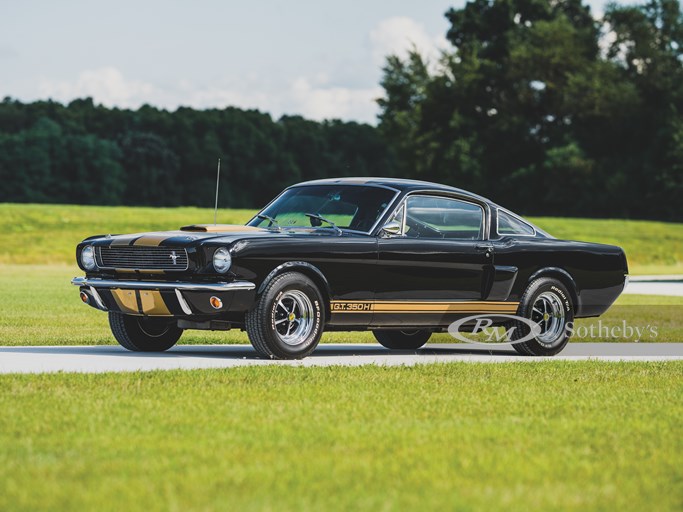