Built to celebrate 50 years of success in motorsport, the Ferrari F50 aimed to offer customers an experience as close to a Formula 1 car as possible, but while retaining the familiarity of a road-legal platform. Following four years of production and development, the F50 was finally unveiled at the 63rd annual Geneva Motor Show in 1995. Luca di Montezemolo, Piero Lardi Ferrari, Sergio Pininfarina, and Niki Lauda were all on hand at the unveiling, illustrating the monumental importance of this new model to the history of Ferrari.

Carbon fiber was utilized throughout, particularly in the body tub and shell, helping to keep the F50 as featherlight as the chassis itself, which was made entirely of Cytec aerospace carbon fiber and tipped the scales at just 225 pounds. The six-speed longitudinal gearbox, complete with a limited-slip differential, was fitted behind the engine, between which the oil tank was mounted for the dry-sump engine lubrication system. This layout was reminiscent of the one used in Ferrari’s contemporary Formula 1 cars. Ferrari’s weight-saving measures and no-nonsense approach to the car’s design were also evident throughout the interior. Wind-up windows instead of electrically operated windows were utilized and even the throttle, brake, and clutch pedals (all fully adjustable) were drilled to further maximize weight reduction.

At its heart was a 4.7-liter naturally aspirated V-12 engine with five valves per cylinder and twin overhead camshafts per bank, derived directly from the engine used in the 1990 Formula 1 season. As fitted to the F50, it was capable of producing 520 horsepower at 8,000 rpm but was capable of reaching an eardrum-shattering 10,000 rpm. The six-speed longitudinal gearbox, complete with a limited-slip differential, was fitted behind the engine, between which the oil tank was mounted for the dry-sump engine lubrication system. To help rein in the power, massive drilled and ventilated disc brakes were fitted with Brembo-supplied four-piston brake calipers.

This fanatical attention to detail in adding performance and reducing weight paid massive dividends in terms of performance. Capable of rocketing to 60 mph from a standstill in just 3.6 seconds, the F50 could accelerate onwards toward a top speed of 202 mph if the driver was brave enough to keep accelerating. Even more incredible was the car’s time for a standing mile – just 30.3 seconds.

The F50 might have looked drastically different from Ferrari’s F1 cars of the time, but it undoubtedly had the heart and soul of a racer. Production would be limited to just 349 examples worldwide, far less than the over 1,300 F40s produced. Of course, while the 288 GTO and F40 before it were only finished in the traditional Ferrari shade of Rosso Corsa, this would change for the F50. The vast majority of F50s produced were indeed finished in red, but a handful received more unique paintwork. Some were finished in yellow and silver, while only four were finished in black.

Of the four black F50s produced, there were only two examples that went to the United States. One such example was unfortunately crashed about three years ago, leaving the example presented here, chassis number 104092, the only pristine and unmolested black, U.S.-specification F50 in existence.

Fitted with a contrasting black and red leather and Alcantara interior, the F50 truly has a menacing look and presents just as beautifully as when it came out of the factory. Throughout its whole life, it has remained in the hands of careful collectors, individuals who recognized the car’s significance and inherent value. As a result, it has been carefully cossetted and maintained accordingly from new and remains in splendid condition throughout.

Importantly, it retains a number of its original accessories, including the following: its original hardtop still wrapped in its roof box, three pieces of unopened factory luggage, its original and unused canvas top, two sets of keys, tool kit, car cover, and wheel nut tool. Furthermore, in December of 2016 the car received a service by a Ferrari specialist, which included changing all the fluids and replacing the car’s fuel bladder. Thus, it remains ready for road use should its next custodian so desire.

Without a doubt the most special F50 that RM Sotheby’s has ever offered, it is highly unlikely that such a remarkable example will become available in the near future. With only four examples ever finished in black, a Nero F50 ranks amongst the rarest of modern Ferraris ever produced. It would stand tall in any of the finest Ferrari collections on the planet as an exceptional example of one of Ferrari’s most incredible road-going automobiles. 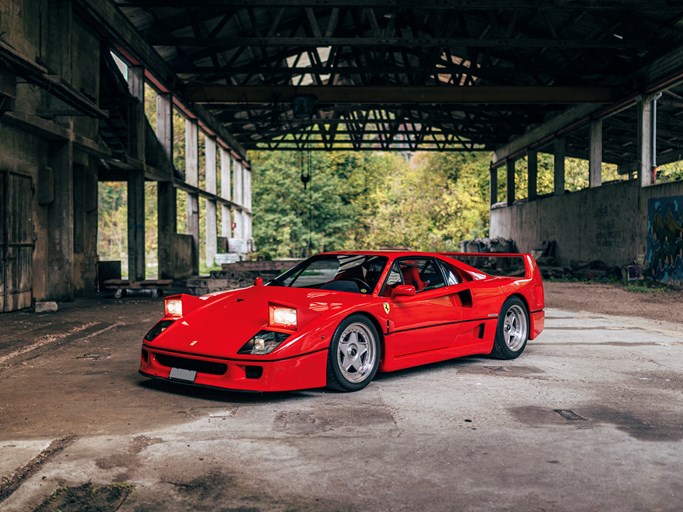