Despite the otherworldly performance that Lamborghini’s Miura offered, none were ever campaigned on the world’s race tracks by the factory or clients. Even though it was designed explicitly as a street-going automobile, the Miura could still handedly keep up with many of its race-bred rivals in terms of performance.

Bob Wallace, Lamborghini’s chief test driver and road development engineer, knew better than most, that if adapted for use in motorsport, the Miura would be a formidable weapon against Ferraris and Porsches. Wallace had been involved with the design and evolution of the Miura since its early days and knew of its enormous potential better than most. With Lamborghini’s factory as his tool, he set out to produce a special race-ready Miura that would hopefully help to bring the company into motorsport.

The resulting automobile was dubbed the Jota. It was built in 1970 as a one-off test bed to fit into the FIA’s Appendix J (hence Jota), and it was graced with a number of upgrades over the existing Miura S. First and foremost, Wallace chose to use the new-for-1971 SV-spec powertrain with split-sump lubrication. With help from the slightly raised compression, the Jota’s engine produced 440 horsepower at 8,000 rpm. Furthermore, the chassis was stiffened, the rear track was widened, the fenders were flared to fit wider rear tires, and the Miura’s characteristic headlight “eyebrows” disappeared. Wallace was also able to achieve a much-improved weight balance by repositioning the fuel tanks in the door sills, rather than in the nose, and the spare tire was fitted just behind the engine.

The race-ready nature of the car was clearly evident from just one look at the interior. It was completely stripped out and fitted with Plexiglas windows and a single windshield wiper. One-millimeter-thick chrome-moly steel pipes were welded to the ladder chassis, and aluminum sheet skin was riveted over the chassis, forming an aluminum semi-monocoque shell. Additionally, the entire body was crafted from aluminum (standard Miuras had roofs made of steel). Thanks to its lightweight body and further weight-saving measures applied throughout, the Jota tipped the scales at just 1,784.5 pounds and sat four inches lower than the standard road going Miura.

Once the car was complete, it was dispatched on a 20,000-mile road test. After the SV was introduced at the Geneva Salon in 1971, Ferruccio Lamborghini scheduled to have the car scrapped, as he had no interest in competition and saw the SV as superior to the stripped-out SVJ on the street. However, it was reportedly saved from the scrapyard and sold to millionaire Alfredo Belpone in Bresica, Italy, who retained all of its racing modifications. To issue an invoice, the company needed a production certificate, and the Jota was given chassis number 5084, an SV-continuation number. The car was restored with the retention of its racing upgrades and sent to Belpone, but it would not be in his possession for long. According to a research document, the car crashed and burned on a closed autostrada while being tested. The original (and intended to be only) Jota was never rebuilt.

Nevertheless, the memory of the ultimate Miura never escaped both Bob Wallace and enthusiasts outside the factory. As word of Wallace’s modifications and the SVJ spread, customers began to request similar options and modifications to their cars. Lamborghini obliged, and five (or up to seven, depending on the source) Miura SVJs were built. These cars retained their original interior creature comforts but were modified to receive the body modifications and engine tuning of the SVJ, along with exhaust, suspension, and brake cooling upgrades.

Prior to its conversion to Jota specifications, chassis number 4892 was constructed by the factory in July 1971 as a Miura SV that was finished in white with a blue interior. The car remained in Italy and was sold new to a Dr. Alcide, of Rome. It is not known when the conversion was done precisely, but a letter issued by Lamborghini in 1974 listed it as a “P400 Miura SV Mod. Jota” at that time, which confirms that the conversion was done within three years following its production. Mechanically, chassis number 4892 received slight engine tuning and was fitted with a wet-sump engine. It was refinished red at that time and imported to Japan by Tomita Automobile Inc. The car then passed through two subsequent owners before Kazuo Takahashi restored it in the late 1980s. After moving to the United States in 2007, it was purchased by a collector residing in northeastern Pennsylvania. The Miura was then shown at the 2007 William K. Vanderbilt Jr. Concours d’Elegance in Newport, Rhode Island, where it earned the Vanderbilt Award.

In May 2007, chassis number 4892 was inspected by Claudi Zampolli, a former Lamborghini employee who was in charge of the company’s Special Projects Division from 1967 to 1972. Zampolli confirmed in a letter that this particular car has all the correct features of the factory-modified SV-Jotas, furthering the belief that this is one of the true factory-modified cars. It was then decided that the car would be fully restored by Miura expert Gary Bobileff, a process which took two years and cost $225,000. The car was painted its current shade of Rosso Granada following its completion, which was photographically documented every step of the way. Bobileff found this car to be an excellent example of the breed, as it showed no evidence of accident damage and was in excellent mechanical shape even before the restoration.

The car was acquired by its current custodian in 2010 and has been sparingly driven and expertly maintained and preserved in his custody. The current owner of this Jota also took the time to research the car’s history and contacted Bob Wallace before his passing. Through this interaction, Wallace was able to confirm that the car was indeed converted to Jota specifications at the factory. The car is still in excellent shape both cosmetically and mechanically, and it would be an ideal acquisition for anyone looking for a Miura that would stand out from the rest. Included with the sale of this car is an extensive file containing letters from Automobili Lamborghini, Claudio Zampoli, and Bob Wallace, as well as restoration photos and documents.

SVJ-specification Miuras are examples of “what could have been” had Lamborghini taken Bob Wallace’s advice and decided to go racing, and they are without a doubt some of the most interesting cars to have ever left Sant’Agata. This Miura SVJ, one of only a handful of its kind built as an homage to the original SVJ, would be an ideal entrant for either concours or track events anywhere in the work. As such, it is an important part of Lamborghini history, harkening back to a car that was the pinnacle of Lamborghini engineering and development at its time. Any Miura is a beautiful car to behold, either at a standstill or at speed, and this SVJ takes the revered Miura to the next level. 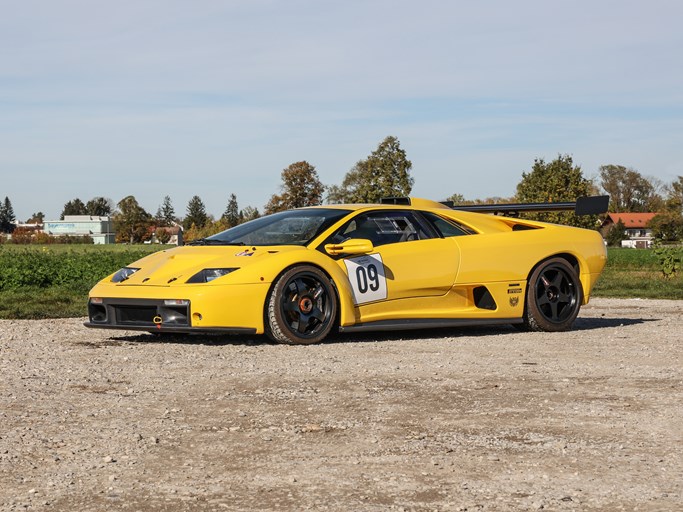