Put simply, there is no other Aston Martin as iconic as the DB5. Launched in 1963 as the company’s flagship grand tourer, the powerful, accomplished, and stylistically crisp modern revision of the DB4 instantly became an object of desire. A hugely appealing machine in its own right, interest in Newport Pagnell’s most expensive model went stratospheric with an unforgettable appearance in the 1964 box office smash Goldfinger. But the DB5 was so much more than a handsome film prop.

Based on the outgoing DB4’s 98-inch-wheelbase chassis, the DB5 boasted nearly 170 updates and modifications, including the attractive competition-style covered headlights borrowed from the DB4GT. Mechanical updates to the running gear included a redesign of the suspension, with the front now adjusted for camber, and Armstrong Selectaride shock absorbers added in the rear. All four corners were equipped with servo-assisted Girling disc brakes.

The most notable advancement was the new 4.0-litre inline six-cylinder engine—an enlarged version of the DB4’s all-aluminium, dual overhead camshaft unit, breathing through three SU carburettors as on the previous DB4 Vantage. The inline six produced 282 horsepower, providing spirited acceleration, going from a standstill to 100 km/h in just 8.1 seconds, and—if the driver continued to accelerate—on to a top speed of 227 km/h. The larger engine also provided some 40 ft lb of additional torque, making the car more responsive in the lower rev range. When coupled to the fully synchromesh ZF five-speed manual overdrive transmission, the result was a true driver’s car that was swift, surefooted, and comfortable—a gentleman’s express par excellence.

It was—as many well-heeled enthusiasts agreed—well worth the admission price, which was roughly double that of a Jaguar E-Type. Yet production of the costly DB5 remained relatively low, with 1,059 units built between 1963 and 1965, and just 180 manufactured for left-hand-drive markets. The Vantage cars were rarer still, with fewer than 70 built in left- and right-hand-drive configurations. Such is the model’s fame and renown, burnished by an ongoing association with one of the world’s most popular film franchises, that it is easy to forget just how scarce it was and is. That rarity has made the DB5 even more sought-after by today’s enthusiasts, with the Vantage variants at the top of many collectors’ wish lists.

This Aston Martin DB5, chassis 2217/L, left the Newport Pagnell factory on 15 September 1965, finished in Silver Birch, with the cabin upholstered in Red Connolly leather. Built for the export market, this DB5 was equipped with a km/h speedometer, and optioned with chrome wire wheels, Fiamm horns, a five-speed ZF manual gearbox, twin Marchal fog lamps, and a Motorola radio. Perhaps of greater interest is what lay underneath the bonnet, chassis 2217/L being specified as a “Vantage” variant, denoting that the performance version of the 4.0-litre engine was installed. Interestingly, this example was equipped with triple SU HD9 carburettors, rather than Weber 45 DCOEs. Having left the factory on 15 September destined for Portugal, chassis 2217/L was delivered to Mocar LDA. On 5 November, Maria Emília Reis Ferreira Barros became the first owner, after purchasing chassis 2217/L from the supplying dealer.

The DB5 Vantage entered the care of its second owner, José Manuel Homem de Macedo Nogueira, on 24 June 1968. Chassis 2217/L changed hands quickly, and a year later it was acquired by its third owner, Albert William Jauson, head of an industrial equipment and tool manufacturer, based in Lisbon. Remaining in company ownership until being registered in his name on 19 September 1975, the DB5 was retained until his passing in the late 1980s.

In 1991, this DB5 Vantage was sold by Mr. Jauson’s widow to its fourth owner, a Dutch enthusiast who is said to have commissioned a sympathetic restoration of the Aston Martin in 1992. It is thought the original Red Connolly leather interior was saved, and that the car was repainted in its factory-correct colour of Silver Birch. The fourth owner contacted the late Roger Stowers, Aston Martin’s historian and archivist in 1992. Mr. Stowers presented the owner with a data sheet for chassis 2217/L, and confirmed that it was one of just 17 left-hand-drive Vantage DB5s ever built. Digital copies of Mr. Stowers’ letters can be found on file. Following the restoration, its fourth owner continued to enjoy chassis 2217/L until 2010, when he offered his car for sale at auction.

The fifth and current owner acquired this Aston Martin DB5 Vantage on 11 September 2010. A Contrôle Technique on file states that the odometer read 76,566 km a day prior to the sale. Shortly after the purchase, chassis 2217/L was exported to Kuwait where it remained dry-stored as part of a large collection.

After 12 years in Kuwait, this highly desirable DB5 Vantage is now offered for sale, and in accordance with the Aston Martin build sheet, it has been confirmed that chassis 2217/L is presented in its factory-correct colour scheme of Silver Birch over Red leather, and retains its matching-numbers chassis and engine. The odometer reads just 76,757 km at the time of cataloguing. Please note, that having remained in storage for 12 years, this DB5 Vantage will require recommissioning prior to road use. Please contact an RM Sotheby’s representative for further information.

Chassis 2217/L presents an exciting opportunity to acquire one of just 17 left-hand-drive Aston Martin DB5 Vantages. An extremely rare and desirable example, finished in what is arguably the most attractive exterior colour, chassis 2217/L is a once-in-a-lifetime restoration project, sure to draw immense attention from those in the Aston Martin community and in the wider historic motoring world. 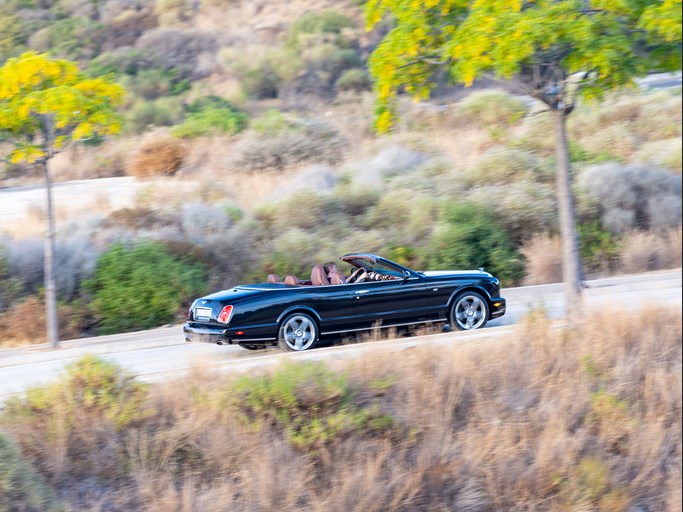