Catalogue View Lots
Chassis No.
Serial No.
WDB2973971Y000020
09/25
Please note that this particular lot is available only to specially credentialed bidders who have registered their interest with RM Sotheby’s in advance of the auction. Please also note that Internet bidding is not available for this lot. Credentialed bidders that are unable to attend the sale may register to bid by telephone or place a commission bid online at rmsothebys.com. Please contact Client Services at +1 519 352 4575 or clientservices@rmsothebys.com for further information.

AMG Motorenbau und Entwicklungsgesellschaft was founded by former Mercedes engineers Hans-Werner Aufrecht and Erhard Melcher in the late 1960s. The company’s acronym was derived from Mr. Aufrecht and Mr. Melcher’s names, as well as the town of Grossaspach, near Stuttgart, where they were headquartered.

After earning considerable respect tuning and racing Mercedes’ durable engines, most notably in the European Touring Car Championship, AMG became an official corporate partner. Heretofore, the relationship between the two had been rather informal, with AMG supplying aftermarket upgrades for more discerning, performance-oriented drivers.

For the 1988 DTM season, however, the new Mercedes-Benz AMG team unveiled the sensational W201 touring race cars. The importance of AMG to Mercedes consequently increased, resulting in the acquisition of the tuning shop and the production of a limited number of AMG 190 E 3.2 road cars. At $90,000, the diminutive sedans carried an S-Class price tag and were capable of Autobahn-worthy speeds in excess of 250 km/h. This project evolved into the highly successful C-Class DTM cars that earned an impressive 84 wins in the 1990s. Such was the fabled start of AMG’s entrance into production sports car manufacturing.

By the mid- to late-1990s, however, there was ever-growing interest from Mercedes-Benz and Porsche to return to an ultra-exclusive form of racing, featuring homologated race cars in the tradition of the great Gran Turismo racers of yesteryear. The result was the FIA GT Championship, which commenced in 1997 to great fanfare and eager enthusiasm. Mercedes-Benz AMG would have to enter the top-level GT1 class and compete head-on with the astounding Porsche 911 GT1 and BMW-powered McLaren F1. In this sense, the upper echelon of FIA GT racing was essentially a battle between Germany’s top three automotive competitors. In order to participate in FIA GT, however, 25 homologated road cars had to be produced by each manufacturer. Not surprisingly, these limited-production cars were instantly collectible and highly sought after.

The task was a monumental one; AMG had only four months to design, build, and test a viable and competitive race car and its road-going brother, with the intent of winning and doing so repeatedly. As there is no replacement for simple pencil and paper, the original designs were crafted as such and then perfected through the use of Computer Aided Design (CAD) before being translated into 1:5 scale three-dimensional clay models. Early in 1997, the proposed engine for the CLK GTR, a 6.9-liter V-12, was already undergoing rigorous testing from AMG’s expert engineers.

By March of the same year, the other two components of AMG’s three-pronged racing campaign were in full swing: the American CART series kicked off in Homestead, Florida, and the new McLaren-Mercedes MP412 made its debut at the Formula 1 Grand Prix of Melbourne, Australia, where its victory marked the first win of a Silver Arrow since 1955.

AMG, however, saved the best for last, as its mechanics worked round the clock on their most impressive product to date. Finally, only 128 days after the first sketches were conceived on paper, the very first CLK GTR took to the track in Spain.

Mercedes veteran Bern Schneider, along with AMG’s young gun, Alexander Wurz, tested the car with extremely successful results. Norbert Haug immediately called Hans-Werner Aufrecht from the pits at the Brazilian Grand Prix to see how testing was proceeding in Spain. Mr. Aufrecht, grinning, understated the car’s performance and said, “Er fährt . . . sieht gut aus” (“It runs . . . and looks good.”). Needless to say, the project was green-lighted by Mercedes’ board of directors.

The CLK GTR did more than just run well. After only four months, AMG had produced two race-ready CLKs and one homologated road version, with 300 prospective buyers eagerly waiting in line. This first CLK GTR for the streets was presented to FIA Head of Constructors Gabriel Katringer on Monday, 1 April 1997, only six days before its race-ready brethren would make their debut at Germany’s home track, the Hockenheimring. Bernd Schneider not only picked up fastest lap honors, but also pole position in the CLK GTR’s maiden voyage. After a slightly staggered start to the season, the new AMG supercars reigned victorious at the A-1 Ring, Suzuka, Donington, Sebring, and Laguna Seca, taking the team championship back home to Affalterbach, while Schneider secured the Drivers’ Championship.

For 1998, however, the CLK GTR saw rather limited use, as the 630-hp behemoth was being phased out by its descendent, the CLK LM, which was conceived with the 24 Hours of Le Mans in mind. Race regulations and conditions at Le Mans required that Mercedes’ entry receive certain upgrades in preparation for the world’s most famous endurance race. Unfortunately, the race-proven M120 V-12 was replaced by another naturally aspirated engine, the M119 V-8. Surprisingly, the V-8 produced equal amounts of horsepower and was believed to be better suited for long-distance racing. Additional aerodynamic modifications were made in the way of a lowered roofline and nose and redesigned air intakes. Ironically, the two CLK LMs retired early in the race due to engine failure.

AMG returned to the FIA GT series unfazed, however, scoring six 1-2 finishes and securing the team championship, as well as the Drivers’ Championship for Ricardo Zonta and seasoned Mercedes racing driver Klaus Ludwig. In 1999, the FIA GT1 class was cancelled due to lack of interest from Mercedes’ competitors. As a result, Mercedes set about designing and building its CLR, a car that owed much of its design to the CLK GTR but was unrestricted by homologation requirements.

McLaren’s entrance into the FIA GT1 class required that its already outstanding McLaren F1 road car be outfitted in racing trim. By contrast, the AMG solution to homologation was quite the opposite. Instead of building a race car from an existing sports car, AMG set about creating an all-new GT1 contender whose homologated variants were essentially nothing more than road-going race cars.

As per FIA regulations, Mercedes ensured construction of 25 of these legendary machines, typically painted the historical German racing color: silver. AMG produced every car in Affalterbach, Germany, with minimal additional creature comforts, ensuring that each owner was delivered the next best thing to the race-proven CLK GTRs. Up front, next to the inboard suspension and radiator system, rested an air conditioning unit, while an anti-lock braking system was added for additional safety. The obvious lack of trunk space was slightly alleviated with two small storage compartments under each upward swinging door, while interior comfort was improved with leather appointments. Although no major aerodynamic changes were made, the car’s rear wing was sculpted to fit the body more smoothly, and the front air dam was also redesigned.

Unlike the McLaren F1, the CLK GTR behaved like a bona fide race car on the street. Gear changes were lightning-quick, thanks to a paddle-operated six-speed sequential manual gearbox lifted directly from the GT1 cars. The mid-mounted 6.9-liter V-12 rested directly behind the driver, producing an utterly raw and menacing exhaust note. With the exception of four round headlamps and distinctive taillights, the CLK GTR shared little with its concurrently introduced passenger car, the Mercedes-Benz CLK.

This exceptional CLK GTR is the ninth of only 25 examples built, of which 20 were coupes. It was first delivered to its original owner Hermann Eschmann in Gummersbach, Germany. Eschmann owned the car until 2005 when it was sold to the former owner and exported to Hong Kong. The car remained overseas in a private collection for 12 years until it was acquired by the current owner and imported into the U.S. Prior to import, the GTR was thoroughly inspected by marque expert Marc Kienle of Kienle Automobiltechnik on 29 March 2017, the report for which is included on file. His inspection outlines that serial no. 09 remains all original, including its original body, engine, and drivetrain. Furthermore, a comprehensive paint analysis was performed and determined that the GTR wears all of its original factory-applied finish. Though the car was fitted with an aftermarket front belly panel, the original carbon fiber panel was retained and stored for safe keeping to avoid marring during transport and is included. Additionally, the GTR had just been serviced with a new fuel bladder and filters and was showing only 1,439 original km at the time.

Imported to the U.S. under the Show or Display exemption at the end of 2017, the CLK GTR was entrusted to J.K. Technologies to perform the requisite import and federalization procedures, which were ultimately completed in April 2018. Invoices and records for this process are included on file. The conversion work by J.K. Technologies remains under limited warranty for EPA and DOT compliance so far as the car is driven on public roads for display purposes and is otherwise not raced or modified. Furthermore, J.K. has offered to assist the new owner with transferring the Show or Display allowance to the next owner.

Included with the CLK GTR are also its original AMG SPS tool chest, original owner’s manuals and service booklets (in German and English), SPS service documentation, manual folio, original spare keys, and first aid kit. The car also retains the original air compressor and tanks, hazard triangle, and torque wrench, should you ever need to fix a flat on the concours field.

As presented, the CLK GTR is the closest a road-going car will ever come to its race-ready sibling. Its performance figures are downright mind-blowing. Considering its status as one of the rarest German sports racing cars ever produced, it holds true to the valued traditions of homologated GT racing and has cemented its place in history as an instant classic among classics. 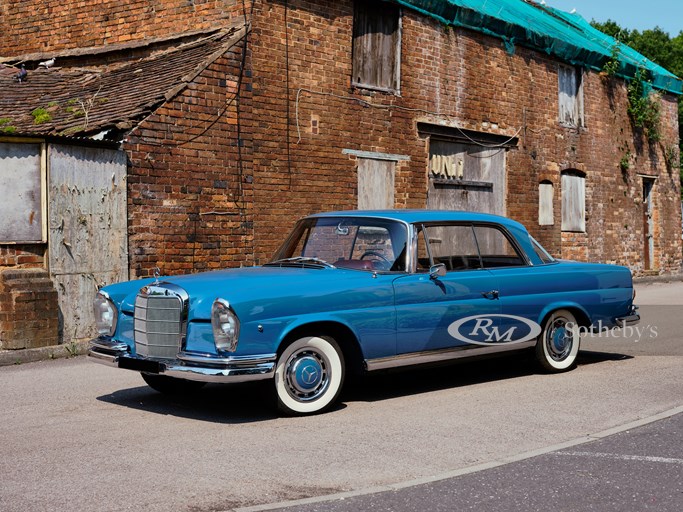 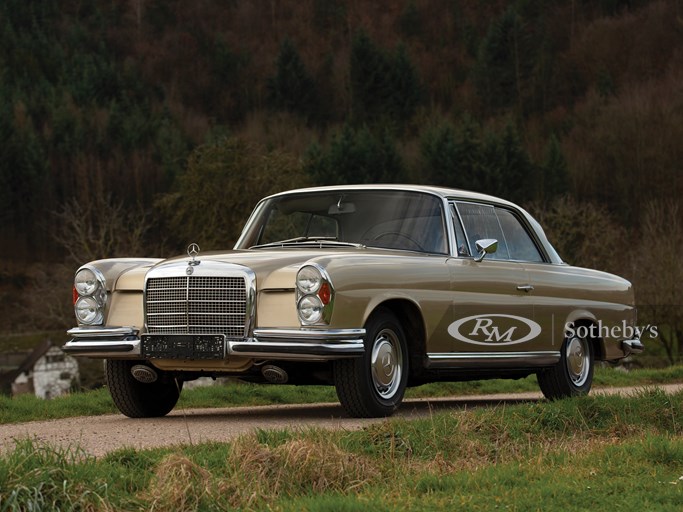